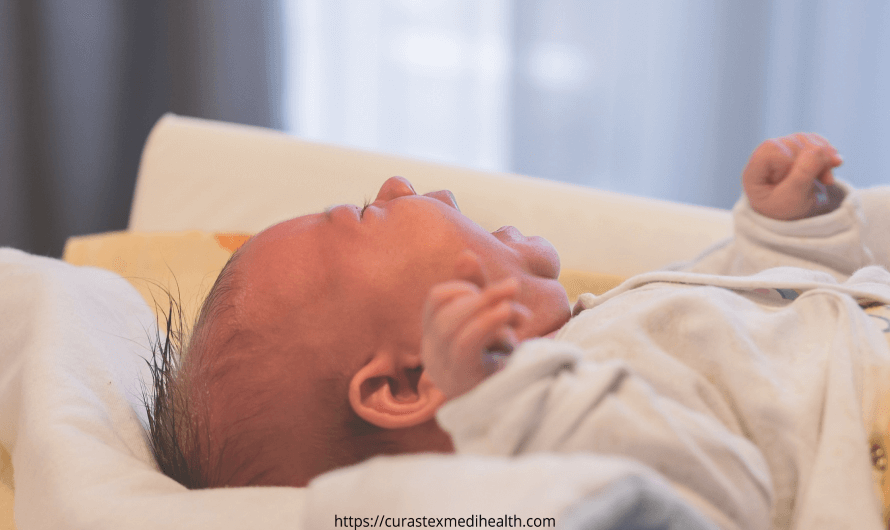 The common cold problem is a viral infection of any child’s nose and throat. Nasal congestion and runny nose are the main symptoms of a cold.

Babies are particularly susceptible to colds, as they are often around other older children. Also, they are yet to develop immunity to many common infections. During the first year of life, most infants have seven colds; If they are under child care they may have more.

Treating infants with colds helps relieve symptoms such as giving them fluids, keeping the air moist, and keeping their nostrils open. Very young children should see a doctor at the first sign of a cold to ensure that they do not have any croup, pneumonia, or other serious illness.

Newborns may have more nasal discharge, which is thin and watery at first, but thick yellow to green for several days.

This is a natural progression of infection and does not automatically mean the worsening of symptoms.

A mild fever may also occur, which may be another sign that the body is fighting an infection.

Other symptoms may include:

Symptoms of cold in newborns are similar to some other diseases, including Croup and Pneumonia. However, these conditions are more serious, so parents and guardians should see a doctor or pediatrician if the newborn develops symptoms of a cold.

A doctor can make a thorough diagnosis and usually calms the troubled mind. In this way, parents or caregivers can better focus on treating their child’s cold.

What causes a child to get cold?

Cold occurs when a virus enters the lining of the nose and throat. The number of viruses responsible for the common cold is more than 200 different viruses.

Through the air – If a person is suffering from a cold sneeze or cough, small amounts of the virus may be released into the air. Then, if your child breathes that air, the virus will get stuck in your child’s nose (nasal membrane).

With direct contact – This means that the child is touching an infected person. Children easily spread with a cold. This is because they often touch the nose, mouth, and eyes and then touch other people or objects. This can spread the virus. It is important to understand that viruses can spread through objects, like toys, that are touched by an individual with symptoms of a cold.

While many of the above symptoms are common with many diseases, newborns often have other symptoms with the flu, Croup, or pneumonia.

A newborn with the flu may have symptoms of cold, but they are often combined with other signs, which may include vomiting, diarrhea, or fever.

The child may also be particularly fussy about other symptoms that are too young to express. A child with the flu often feels worse than a cold, but not always.

Infants with the group will have symptoms of the common cold, but these symptoms may worsen quickly.

Infants may have a hard bark cough. They may have difficulty breathing, due to which they may have to make stress or wheeling noise when they cough.

Whooping cough starts with a cold, but symptoms can change in about a week. The child may develop a violent, hacking cough that makes breathing difficult.

Causing a child to take a deep breath soon after coughing can occur. These breaths make the sound of screaming.

However, the classic “cry” is more common in older children and adults and is not common in infants.

A child with whooping cough often vomits after a cough or, more severely, may turn blue for a short time or hold breath.

Infants may have a higher risk of developing a cold for pneumonia than older adults. This can happen quickly, so it is important to inform your pediatrician to make the correct diagnosis.

Symptoms of pneumonia include:

Children suffering from pneumonia may have difficulty in breathing. They could breathe faster than normal, or their breathing could be difficult.

In some cases, their lips or fingers may appear blurred, indicating that they are not receiving enough oxygen and need emergency medical attention.

A newborn baby’s cold often requires careful treatment. The child’s body learns to defend itself, and the best help adults can get during this process is comfort and gentle care.

Over-the-counter cold medicines are not recommended for children as they do not work and can have serious side effects.

In some cases, they may also discuss the use of antipyretic drugs.

It may take up to 2 weeks for the baby’s symptoms to completely disappear.

Hydration: Mucus and fever can take away important fluids and electrolytes therefore babies should be watered properly.

Clear your nasal passages. Clean the baby’s nose with a rubber syringe to make breathing easier.

Humidity: Using a mild moisturizer to moisturize the area around the crib can help it breathe better and relieve nasal congestion.

Steam: If you are standing in stuffed hot water for 10-15 minutes, mucus can be produced.

Relax: It is best to avoid public places and give your child enough time to rest and when he or she recovers.

Any worsening of symptoms should be discussed with a doctor, and home remedies should be used with caution.

While newborns often do not catch a cold, older infants and young children are at greater risk of a cold, as they have not yet developed resistance to the virus that causes them.

Several other factors may increase this risk, such as contact with older children or being around people who smoke.

Viruses that cause the common cold can spread in the air or through contact with someone who has the virus. The person may be asymptomatic and a possible carrier. A child coming in contact with such a person can easily become infected himself.

To help your baby survive the cold, it is best to take steps to reduce its exposure. It contains:

Some maternal antibodies can also be fed to the baby by feeding. This does not mean that the child will not get sick, but it can get sick less often and make it easier for them to fight infection than infants suffering from the formula feed.

When to see a healthcare provider?

An increase in body temperature is one of the primary means of the child that prevents infections such as the common cold.

Very young children may not have a fever even if they have severe infections. If the newborn seems ill even without fever, seek medical attention immediately.

In all cases of a young child, who has a fever for more than a few days, or who goes away for a day or two, but then comes back, see a doctor.

In some cases, a parent or guardian may simply feel that the child is simply wrong. If there is any doubt about the symptoms that a child is exhibiting, they should see a doctor immediately.